Persia and Greece: the final battle. Plataea 479 BC

After the battle of Salamis, the Athenians were held responsible for the victory, and as a result got a very high opinion of themselves.

According to Diodorus, the Spartans decided the Athenians needed taking down a peg or two, and saw to it that the prize (Greeks loved competitions and prizes.) went not to Athens, but to the little island of Aegina. Aegina had been a major rival of Athens in earlier years, and they were by no means friends. It had only 30 ships at Salamis compared with Athens' 180 - and had actually submitted to Persia in 491 BC before Marathon. The Spartans tried to soften up Themistocles, the Athenian architect of victory, by giving him a special award - but when he accepted it, the Athenians were so annoyed they sacked him as general.

Encouraged by what he saw as a serious quarrel between Athens and Sparta, Mardonius, commander of the Persian army since Xerxes had left, offered Athens a deal: he would give them any land in Greece they wanted, and rebuild the temples.

But the Athenians rejected the Persian offer, and patched things up with Sparta. It was already too late, though…

since the barbarians had already entered Attica.

Mardonius was furious with Athens, and marched back into their territory with his entire army (200,000 according to Diodorus). The Athenians abandoned the city and fled again in panic to the island of Salamis, leaving Mardonius a free hand:

He devastated their countryside and levelled their city, and totally destroyed any temples still standing.

The Battle of Plataea

Mardonius then withdrew to near Thebes, north of the mountains separating Theban and Athenian territory, to wait for the Greeks. The Greeks had finally decided to act jointly, and sent a coalition force (from 31 different states) northwards. For days neither side wanted to be the ones to attack, as both were in good defensive positions on opposite sides of the river Asopus.

The Battle of Plataea 479 BC

Greek accounts of the battle are confused and confusing. This isn't surprising, because Herodotus' informants would have been ordinary soldiers, who probably didn't have a clue what the generals were trying to do. Eventually the battle began - although only a fraction of the massive Persian army was involved. But when Mardonius got himself killed, the Persian army (including the many Greeks fighting with them) withdrew to their fortified camp or joined the main force, now under the control of Artabazus, in Thebes. If it had been up to Artabazus, there would never have been a battle: he had been in favour of sitting tight and using cash offers to exploit the differences between the various Greek cities.

The Spartans and Athenians, still competing for glory, attacked the Persian camp. When they took it, Pausanias - the Spartan king and supreme Greek commander - ordered "no prisoners". Diodorus:

A a result there was soon quite an incredible death toll. It was only after the Greeks had butchered over 100,000 barbarians that they reluctantly stopped the slaughter of their enemies.

Herodotus describes a visit to the deserted Persian camp, by the Spartan commander:

Pausanias ordered the Persian cooks to prepare a Persian meal. When he saw the gold and silver couches with sumptuous coverings, and the tables, also of gold and silver, laid out with a magnificent feast, he was struck with amazement at all the good things in front of him. Then, for a joke, he ordered his men to prepare a Spartan meal. He invited the Greek generals, and showed them the two meals. "What an idiot the leader of the Persians was. This is how he lives, but he came here to us with our wretched way of life, in order to deprive us of it." 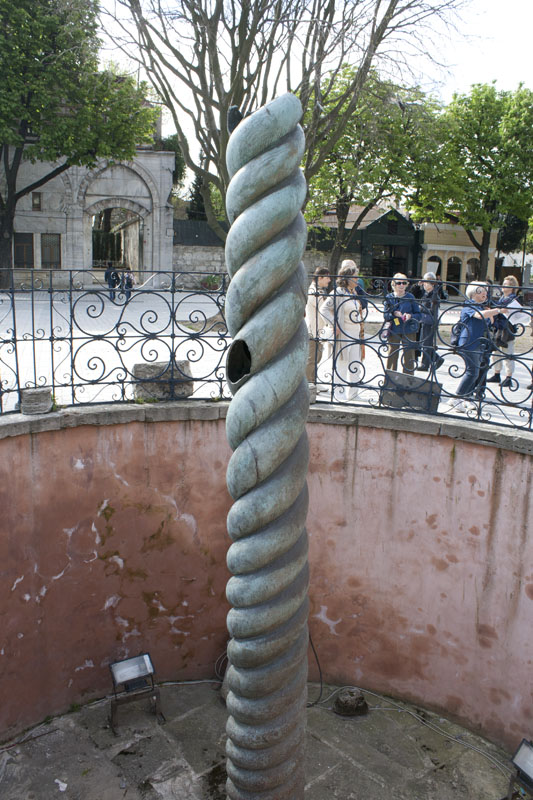 The Serpent Column, now in Istanbul. (Photo AM Wilson)

After their victory, according to Herodotus, the Greeks had a trophy made to thank Apollo for the victory. It was three intertwined snakes, with their heads at the top, supporting a gold tripod.

When the booty had been gathered together, a tenth of the whole was set apart for the Delphian god, and, from this, was made the golden tripod which stands on the three-headed bronze serpent nearest the altar.

It was dedicated to Apollo at Delphi, to remind visitors of the Greek victory at Plataea. On it were inscribed the names of the 31 Greek cities who were there - with the number of men they contributed (Sparta and Athens head the list with 10,000 and 8,000).The gold tripod lasted 125 years before it was melted down to pay troops in a local war. But the column itself was taken in AD 324 by the Roman Emperor Constantine to his new capital at Constantinople, to decorate his race-track (hippodrome). It's still there - in Istanbul - even fragments of the snakes' heads survive (now in the museum).

Artabazus led his army back to Asia as quickly as he could. The Greeks had voted not to destroy the bridges. On the very same day as the victory at Plataea, the Greek navy defeated the Persian fleet at Mykale, between the island of Samos and the Anatolian mainland. As at Plataea, the commander was a Spartan.

Mardonius fails to exploit rivalry between the Greeks. After he's killed in the battle fought at Plataea near Thebes, the Persian forces abandon Greece. 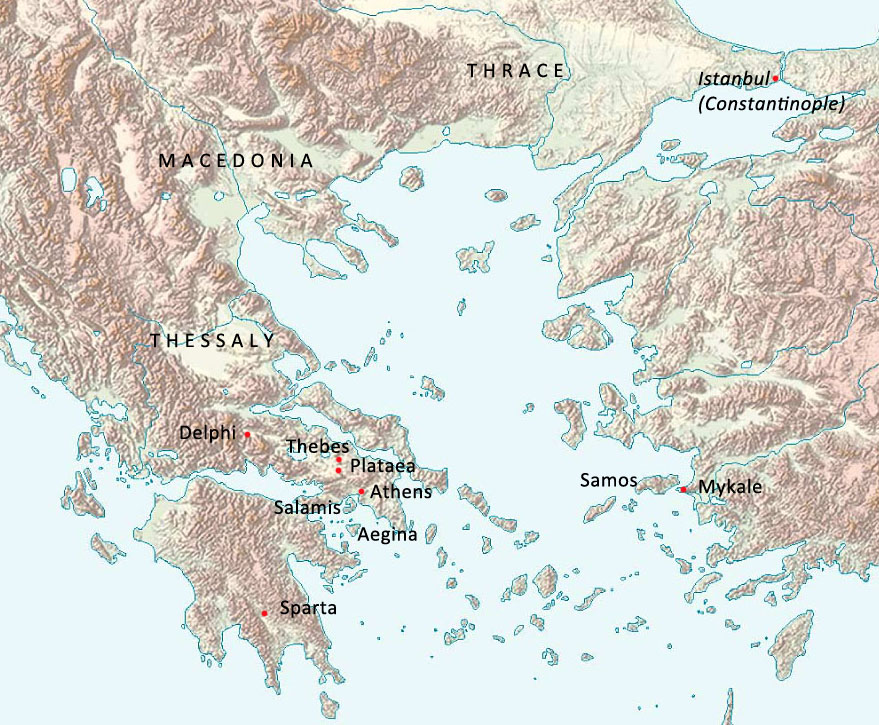 Diodorus planned to write a history of the world in 42 books (which he called "The Library") in Greek, from the Trojan War up to his own time (around 30 BC) - but never quite finished it. He used earlier writers, including Herodotus. His numbers may not be reliable. He naturally is very interested in the history of Sicily. He tells us the Persians had made an agreement with the Carthaginians, for them to attack the Greeks in Sicily at the same time. The Carthaginians, too, were defeated.

It took him 45 days to get back to the bridge of boats. Herodotus says his army suffered from lack of supplies ("they ate grass, and stripped the leaves and bark from the trees") and from disease. He took a boat from the Hellespont; when it got caught in a storm, Xerxes apparently ordered his Persian elite to jump overboard to make the ship lighter. Herodotus doesn't believe this: he says Xerxes would surely have told the Phoenician sailors to sacrifice themselves.