The Sasanians - Shapur I looks west

THE SASANIANS: SHAPUR I

Uniquely, we have Shapur's own account of his reign. Which is good, because otherwise sources for this period are very limited. 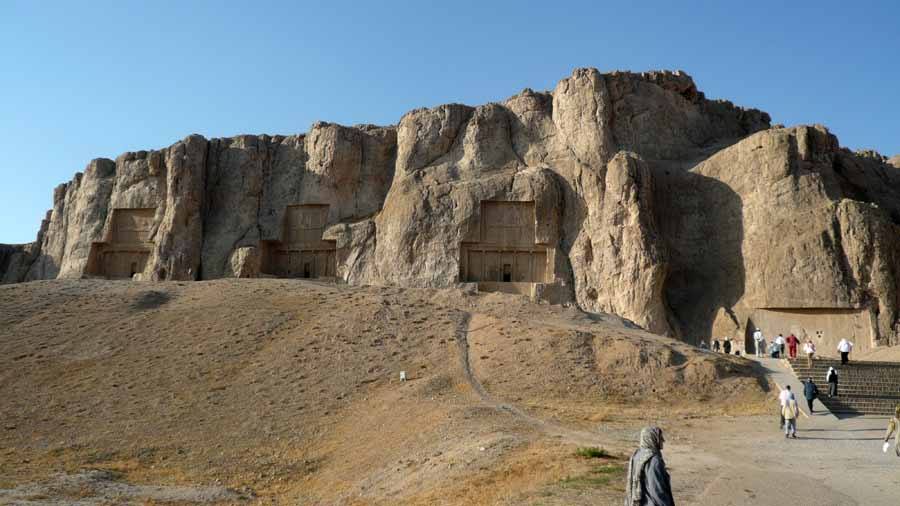 On a building from the Achaemenid period (known as the Cube of Zoroaster - Ka'be-ye Zaradusht - although we don't know what it was actually for) just opposite the Achaemenid tombs on the cliff at Naqsh-i Rustam in Persis, Shapur had his achievements inscribed. Just like Darius at Bisitun, they were in three languages (Parthian Pahlavi, Sasanian Middle Persian, and Greek). He wanted to impress those who remembered the Parthian triumphs over Rome, his own countrymen from Persis, and the wealthy Greek residents of the empire. It's a summary, not a full and detailed history. 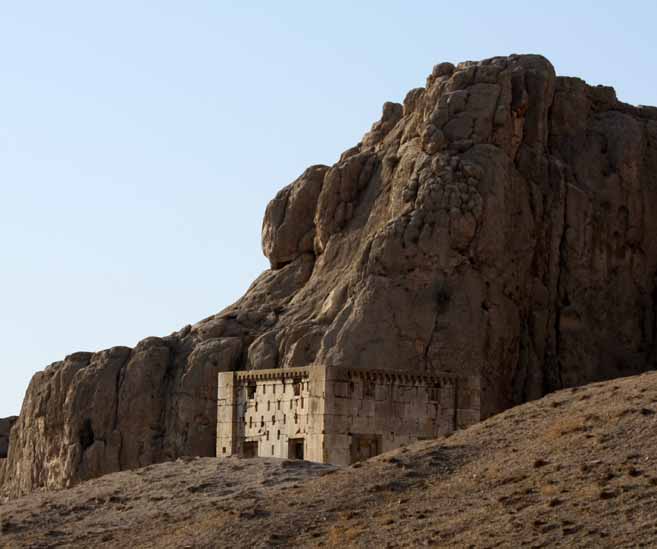 The so-called "Cube of Zoroaster" on which Shapur I had his achievements inscribed (photo AMW).

This is part of what Shapur said:

And these many lands, and rulers and governors, all have become tributary and subject to us.

When at first we had become established in the empire, Gordian Caesar raised in all of the Roman Empire a force from the Goth and German realms and marched on Babylonia [Assyria] against the Empire of Iran and against us. On the border of Babylonia at Misikhe, a great "head to head" battle occurred. Gordian Caesar was killed and the Roman force was destroyed. And the Romans made Philip Caesar [ie emperor]. Then Philip Caesar came to us for terms, and to ransom their lives, gave us 500,000 denarii, and became tributary to us. And for this reason we have renamed Misikhe Peroz-Shapur.

And Caesar lied again and did wrong to Armenia. Then we attacked the Roman Empire and annihilated at Barbalissos a Roman force of 60,000 and Syria and the environs of Syria we burned, ruined and pillaged all.

In this one campaign we conquered of the Roman Empire fortresses and towns: [there's a list of names of places in Syria] a total of 37 towns with surroundings. 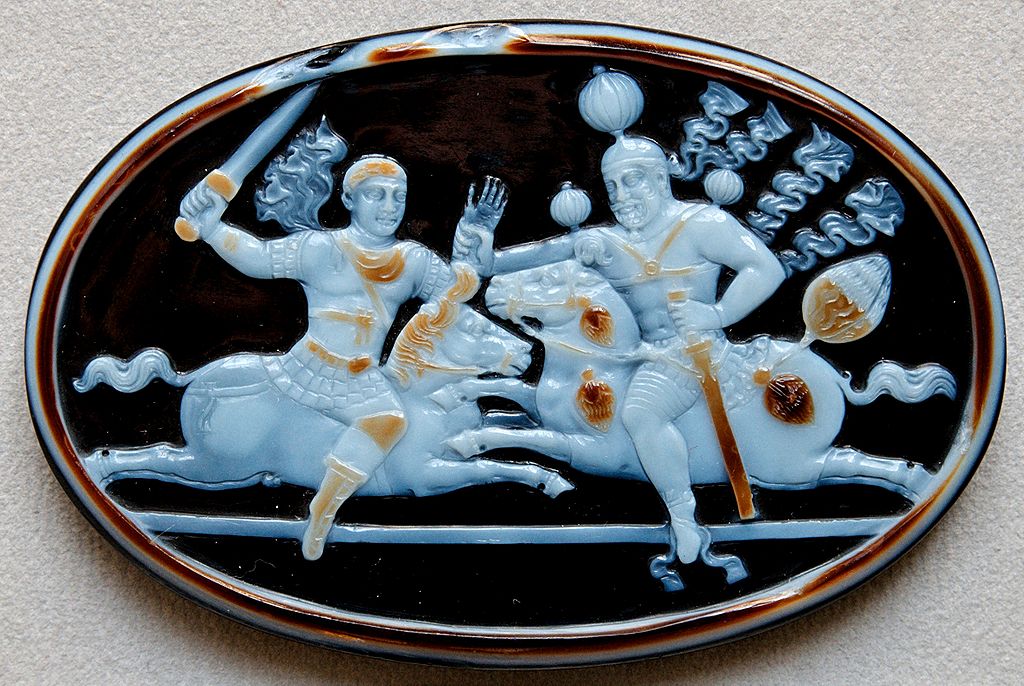 An exquisite sardonyx cameo, showing the influence of Roman craftsmanship.
Shapur and Valerian face each other.

And beyond Carrhae and Edessa we had a great battle with Valerian Caesar. We made prisoner ourselves with our own hands Valerian Caesar and the others, chiefs of that army, the praetorian prefect, senators; we made all prisoners and deported them to Persis. And Syria, Cilicia and Cappadocia we burned , ruined and pillaged. 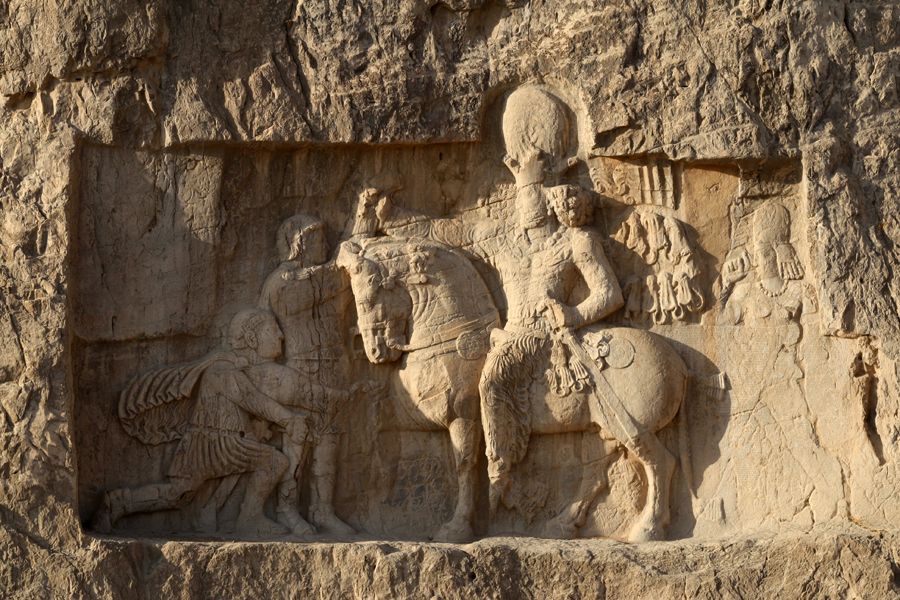 In that campaign we conquered of the Roman Empire [he lists the conquered cities in Anatolia] altogether all these 36 cities with their surroundings.

And men of the Roman Empire, of non-Iranians, we deported. We settled them in the Empire of Iran in Persis, Parthia, Khuzistan, in Babylonia and in other lands where there were domains of our father, grandfathers and of our ancestors.

We searched out for conquest many other lands, and we acquired fame for heroism, which we
have not engraved here, except for the preceding. We ordered it written so that whoever
comes after us may know this fame, heroism and power of us.

Archaeological discoveries have been able to add to Shapur's own account, though they are little help in unravelling the sequence of events. During the invasion of Syria, among other cities, the Sasanians besieged Dura Europos, a frontier town on the Euphrates. The Romans had taken it from the Parthians in around AD 165 and it became an important base for them. It was already a multi-cultural community, with a predominantly Greek flavour derived from its Seleucid founders, who had given it the traditional Greek grid-pattern layout of streets. There were temples to Greek and Roman gods - and also a church, a mithraeum and a synagogue (all containing remarkably well-preserved paintings). 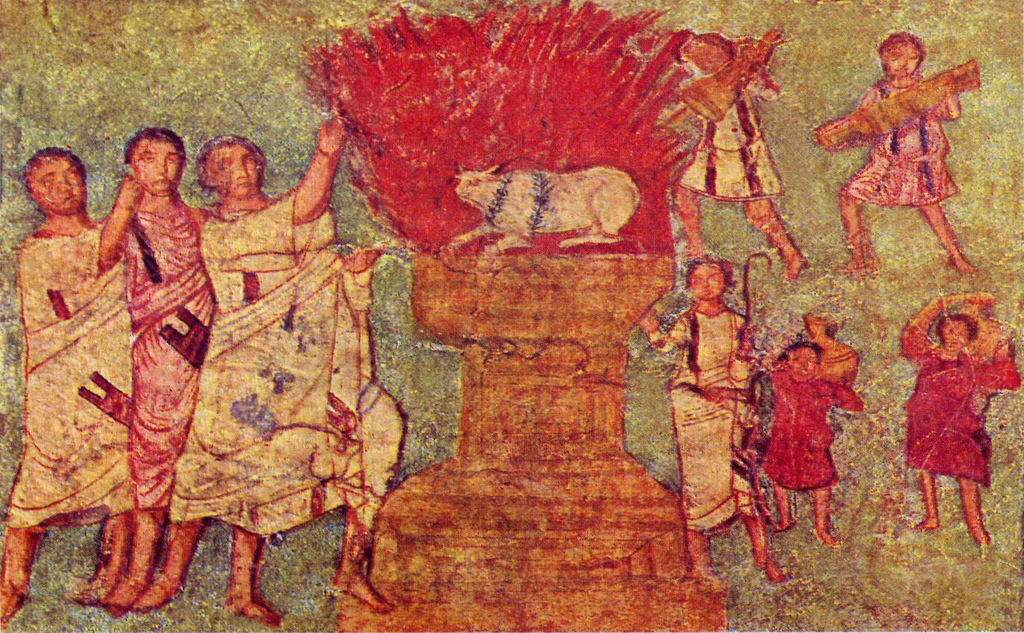 Fresco from the synagogue at Dura Europos showing the worship of the golden calf. Wikimedia commons.

Shapur's siege was determined and highly organised: he built ramps, used catapult artillery, and tunnels to undermine the walls. A sealed-off tunnel was found to contain 20 bodies - 19 Romans (coins on them help date the siege to AD 256) and a Persian. The presence alongside the bodies of traces of bitumen and sulphur have led to speculation that they were killed by poison gas released into the mine - presumably by the lone Persian. After the fall of the city, its population was deported, and the site abandoned to the desert, until its chance rediscovery in 1920. Further discussion here.

"The place of Rustam" was so named in honour of the Iranian folk-heo, Rustam, a major character in Firdowsi's Shahnameh. Later Iranians thought the image of Shapur I accepting the surrender of a kneeling Roman emperor[below] was the mythical Rustam, mounted on his trusty steed Raksh.

Ardashir's son's aggressive policy towards the disintegrating Roman empire leads to a Roman counter-attack. No fewer than three Roman emperors are seen off by Shapur: Gordian III is (probably) killed in battle, Philip the Arab buys peace, and Valerian I is captured and held prisoner for the rest of his life.

For a full picture of the chaotic state of the Roman empire at this time see here. Between AD 180 (death of Marcus Aurelius) and AD 284 (Diocletian) there were 29 emperors.

The other lands Shapur rules:

"Georgia, Segan [Makhelonia = Mingrelia], Arran [Albania], Balasakan, up to the Caucasus mountains and the Gates of Albania, and all of the mountain chain of Pareshwar, Media, Gurgan, Merv, Herat and all of Aparshahr, Kerman, Sistan, Turan, Makuran, Paradene,
Hindustan [India = Sind], the Kushanshahr up to Peshawar, and up to Kashgar, Sogdiana and to the mountains of Tashkent, and on the other side of the sea, Oman. And we have given to a
village district the name Peroz-Shapur and we made Hurmazd-Ardashir by name Shapur."

Became the youngest ever Roman emperor, aged 13. He was appointed in a time of anarchy and chaos following the murder of Alexander Severus. According to Roman sources, he was victorious against the Persians in 243 (not mentioned by Shapur). He was defeated and killed at Misikhe (location unknown) in AD 244 (not mentioned by the Romans.)

After taking over from Gordian, and making peace with Shapur I, he returned to Rome and celebrated Rome's millennium in AD 248 (1000 years since its foundation in 776 BC - AUC 1000 in Roman dating). He's said by one source (Eusebius) to have been a Christian - but it's not generally accepted.

This is a Zoroastrian idea - adding a religious dimension to the war. The Persians fight for Ahura Mazda and truth, while the Romans are on the side of "the lie". Compare Darius I's attitude to "the lie". Philip the Arab's lie was that he went back on a deal to give Armenia to the Persians, and tried to revive the old agreement where Rome was in control. Review the details of the treaty here.

Was the the last stronghold of the Parthians. In AD 251, the pro-Parthian king was murdered, the Persians invaded, and Shapur I's son Hurmazd was made king of Armenia. Shapur was exploiting chaos in the Roman empire - civil war between rival would-be emperors, invasions by Goths across the Rhine and Danube frontiers, and a horrendous plague.

The only Roman emperor ever to be taken prisoner. He was probably treated well in captivity - although there are several Christian writers (first Lactantius) who accuse Shapur of all kinds of atrocities - using Valerian as a footstool, making him swallow gold, then having him skinned and stuffed with straw, and put on show in a temple. This can be safely dismissed as Christian propaganda - Valerian had been a notorious persecutor of Christians. Shapur built the city of Bishapur to commemorate his victory - it was built by Roman prisoners, and was probably where Valerian was housed.

This list shows us something of the multi-cultural nature of the Roman army, which the Persians would have been able to study after so many prisoners were taken.

The Roman prisoners (like the "Bridge on the River Kwai" built by British prisoners of the Japanese in Thailand in WW2) built a bridge there in Shushtar, which is still called Band-i Qaisar (Caesar's Bridge - it was also a dam).

These deportees were not the same as the captured soldiers from Valerian's defeated army. Shapur needed them to develop agriculture in underpopulated areas (such as Khuzistan- the area otherwise known as Elymais or Susiana) and to provide expertise. There was an unforeseen consequence: many of these Roman citizens from Syria, Cilicia and Cappadocia were Christians. This was not a problem - yet.

Among them was Nisibis: hotly contested bnetween Roma and Parthia - a state which continued under the Sasanians and Byzantines, until it became more or less permanently Persian after Jovian's retreat in 363. It became an important Christian centre for the Church of the East.