Is it not passing brave to be a king and ride in triumph in Persepolis? Christopher Marlowe, in his play Tamburlaine  makes Tamburlaine say these words. In history he's known as Timur, the Mongolian who conquered Persia and the middle east in the 15th century AD – just as it was recovering from the havoc caused by the earlier Mongol invader Genghis Khan. Like most invaders, though, the Timurids soon became ‘persianised’. How much could Marlowe have known about Persepolis?

Parsa  The Greek word persai, to sack, also means "Persians". And 'persepolis' means sacker of cities -  the name Odysseus was given. The Greeks had a similar experience when they first encountered Rome - the word means "power" in Greek.

At least 18 football pitches would fit on to the Persepolis site.

B.
11 adult males, 6 adult females, total 17 cattle were slaughtered. The cowhides were delivered to the treasury. Rauzazza and Irdurtiya received them … in the 18th year in the seventh month.

Leather for current records? Transcribed on to clay tablets later?

C.
1,783 BAR of flour, supplied by Irmada, was dispensed in behalf of the king. At Anzamannakka. In the 21st year. Karakka and Midasa received it, total 2 grain handlers.

That is a lot of flour! King gets his ready ground - ordinary mortals get their ration as grain?

D.
90 BAR of flour, supplied by Karma, Dakizzida the camel-driver received. He gave it as rations to 10 camels. Twelfth month, 22nd year.

Comparing the three tablets above, can you work out how much was consumed per man, woman, boy, girl, king, camel?

E.
16 quarts of wine, supplied by Ušaya, Aššašturrana the battle-axe bearer received as ration. He went to the king. He carried a sealed document of Parnaka.

How does this compare with current recommended consumption of alcohol units?

F.
16 marriš of wine, supplied by Šarubka, Appirka the priest received, and utilized it for the god Ahuramazda and the god Mithra and the god Šimut. 21st year.

Now Ruz (Naw Ruz - lot's of spellings) celebrated by Iranians wherever they are on 21st March each year. Its origins are obscure - but it's probably one of the oldest festivals in the world that is still observed. It's certain;y older than any Jewish, Christian or Muslim festival. Now Ruz means New Year - and the festival celebrates new life, new growth and renewal after the end of winter.

One of the traditional features is the Now Ruz table - decorated with the haft-sin , seven things beginning with the letter s or sh: one is always newly-sprouting seeds of some kind. There's a lot more to it - and it's done differently in various parts of the Iranian world.

This is an example from Now Ruz held recently at the British Museum. 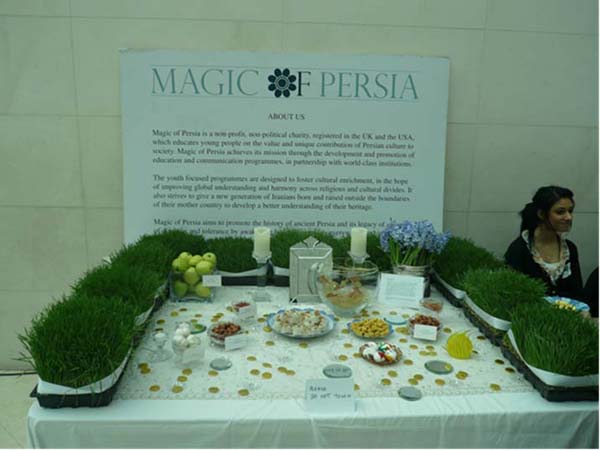 It's long been asserted that the Persepolis sculpture with its processions of various peoples celebrated a Now Ruz festival - but there's no hard evidence.

Collect pictures and information about palaces and rulers' residences. : it was said that a visitor to democratic Athens would not be able to find the house of one of their leaders, Pericles or Themistocles, because they lived just like everyone else.

Look at the coins (or notes!) you are carrying. What message, if any, are they trying to communicate? Find out about the designs on a US dollar. What is the message here?

Draw a scale plan of Persepolis on tracing paper. Overlay it on a map of your local area of the same scale.

Find out about the Persian spring festival – students could prepare a “no ruz” table. . Details of the seven items (beginning with sh- or s- according to various traditions), and much more are on this web site: http://www.heritageinstitute.com/zoroastrianism/nowruz/index.htm Also lots on the Wikipedia Nowruz page.