"The National History of the Iranian people"

One of the strange features of Iranian history is that from the time of the Sasanians, perhaps originating with the Parthians, a rather different version of their national history was told by the Iranians themselves. Something was said about this at the start of the course (see here) - but, because it's this story, rather than the one told by modern historians, that became central to the Iranians' view of themselves, it's important to know about it.

The main sources, all from the Islamic period, are: 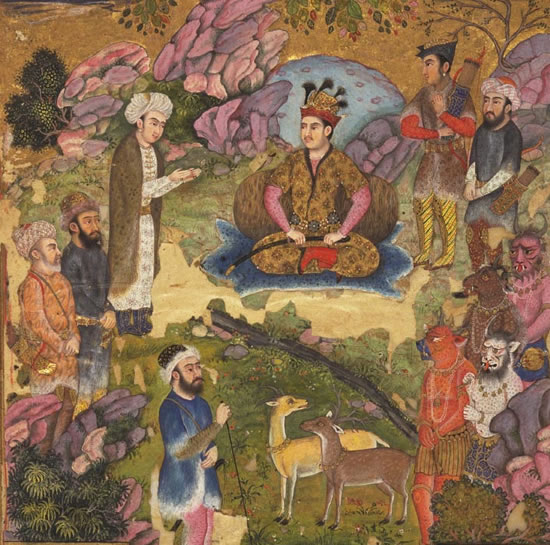 How is the "national history" different from the history as told by modern historians?

In the Iranian idea of history, finding out the facts is not important. What is important is to promote and reinforce the ideals of the nation of Iran. Kings are to be obeyed, heroes to be admired and copied, so that national pride can be passed on, and the wisdom of the past can benefit the future. [Does it sound a bit like Michael Gove's educational policies in the UK in 2013?] So there's nothing wrong with a bit of exaggeration - the details are less important than telling the story in an exciting and convincing way.

We'll give the bare bones of the story: you should read Firdowsi to get the full flavour.

There are three eras:

NEXT: THE FIRST ERA - THE KINGS OF THE WORLD

Iranian national history tells the story of the 60 kings who ruled from the beginning of the world up to Khusrau II.

It combines fact, legend and myth into a national Iranian narrative, which emphasises the importance of good kings, whose farr (divine grace) leads them with the help of Ahura Mazda and other divine powers to fight off the challenges of the evil Ahriman and his henchmen.

The first millennium starts with Kayumars and ends with Jamshid.

The second millennium is the 1000 year rule of Zahhak.

The third millennium goes from Feraydun to the conversion of Gushtasp to Zoroastrianism. (Feraydun rules for 500 years, Kavus for 150 and Lurasp for 120)

The world is due to end at the end of the sixth Millennium.