Persia and the Greeks

PERSIA AND THE GREEKS

In 331 BC, after Persepolis had existed for less than 200 years, it was looted and then destroyed by invaders from Greece. Alexander of Macedon (Alexander the Great) removed all its treasure, for which purpose he had ordered 10,000 baggage animals and 5,000 camels. The symbol of the Achaemenid empire was then set ablaze.

To discover why, we need to go back, to the first time the Persians got involved with the Greeks. The Greeks who lived on the west coast of Anatolia had become Persian subjects when Cyrus conquered Croesus’ kingdom of Lydia.

Homer and the Trojan War

Greeks had been living there for hundreds of years. They were called Ionians. In around 750 BC, an Ionian poet, known as Homer, had composed two long poems (the Iliad and the Odyssey) commemorating a great war between the Greeks of the mainland, and the city of Troy in Anatolia near the entrance to the Black Sea. Homer’s stories of a Trojan War may reflect an actual historical event around 1100 BC, when Greeks were trying to win control of the strategic route into the Black Sea, now that Anatolia was no longer controlled by the Hittite empire.

But, even if it never happened, the Trojan War, thanks to Homer, was seen by the Greeks as the most important event in their past. 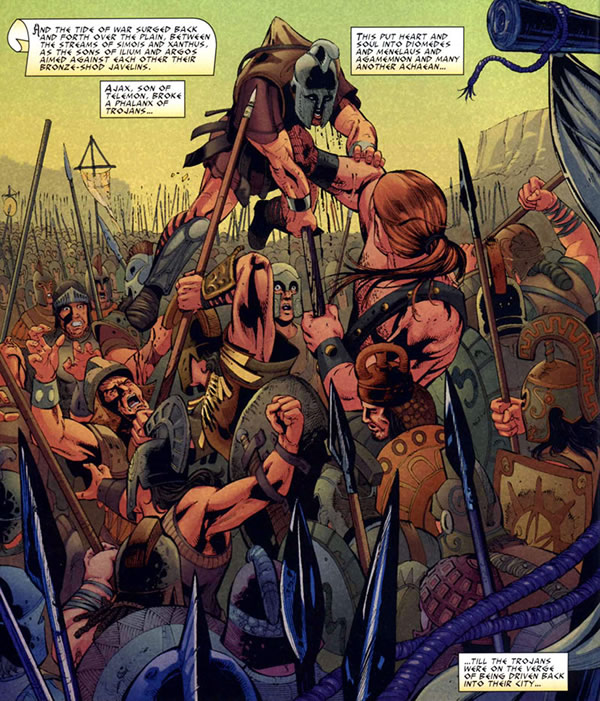 Homer’s two epics were the earliest and perhaps the greatest examples of Greek storytelling. By the time of Darius, every Greek boy’s education was centred on Homer’s stories of the Trojan War. They learned to admire its heroes - Achilles the mighty warrior, king Agamemnon, the wily Odysseus, Ajax, Nestor - and even Hector and Paris on the Trojan side. It had its heroines too: Helen, the cause of it all, Hector’s wife Andromache and Penelope who waited so patiently for her husband Odysseus to come home. 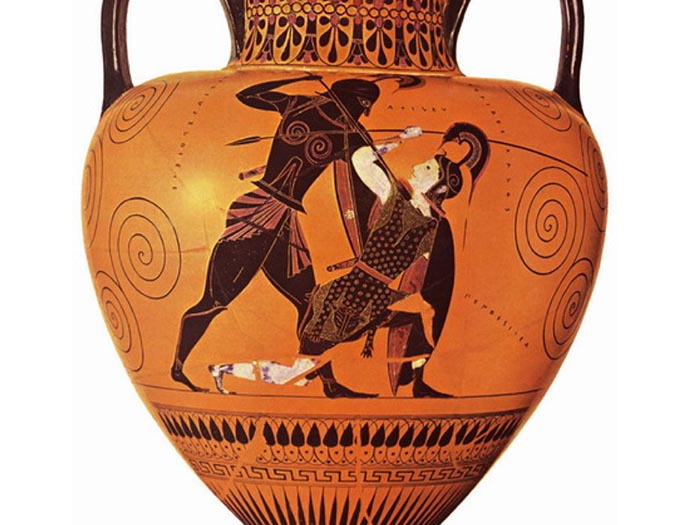 Achilles kills the Amazon queen Penthesilea, an ally of the Trojans

The stories of Troy taught the Greeks to fear a great enemy to the east. According to Homer, they had beaten the Trojans after 10 years of fierce fighting, and sacked Troy. Many heroes had been killed but had won great honour - and its reward: a kind of immortality. They would be remembered for ever in song and story.

A war against Persia would be round two in the great struggle between east and west, or as they saw it between Greeks and barbarians [barbaroi - the insulting Greek word for people who didn’t speak their language].

Darius had been determined to extend Achaemenid territory just as previous kings had done. Cambyses had added Egypt, to which his Egyptian satrap had added Cyrene (Libya), and Darius had added territory not only to the far east of his empire in what's now Pakistan, but also to the west. He bridged the Bosporus and the Danube, but failed to conquer the Scythians of the rich plains of present day Belarus and Ukraine. They had invaded Media and disrupted communications, but Darius could not catch up with them in their homelands, and had to retreat and be content to set his frontier at the Danube bridge. South of that, he added Thrace and Macedon [now Bulgaria and Northern Greece] aiming to win complete mastery of the Aegean Sea. This alarmed the Ionian Greeks, who, most probably, decided to try and free themselves from Persian control before this could happen. But the only account we have is, inevitably, by Herodotus, who sees it all quite differently. Darius had been attempting to win "hearts and minds" by encouraging Greeks to serve in his army and navy, as craftsmen and artisans, ansd as administrators. There was thus a substantial number of Greek "medizers" who supported Persian policies and ambitions.

This is how Herodotus reckons the Persians got involved with the Greeks:

Histiaeus was tyrant (strong-man-in-charge) of the Ionian Greek city of Miletus. After he’d played a rather dubious part in Darius's Thracian campaign, Darius decided to keep an eye on him and take him back to Susa, as an 'advisor'. But Histiaeus got bored in Persia, and wanted to go home. He guessed that if the Ionian Greeks turned against Persia, Darius would have to send him back to help restore order: this would be his only chance of getting home. So he sent a message to his son-in-law, Aristagoras, the current ruler of Miletus:

It happened that a man with a tattooed head arrived from Histiaeus, giving Aristagoras the signal to revolt from the Great King. For Histiaeus, wanting to signal to Aristagoras to revolt, had no other means of passing a message, as all the roads were guarded. So he got his most trustworthy slave, shaved his head, tattooed the message on it, and waited for the hair to re-grow. As soon as it had grown, he sent him off. He was to tell Aristagoras: “shave off my hair and take a good look at my head”.

The Ionian cities duly expelled their Persian-backed tyrants, and appealed to the Greeks in the mainland for help. They hoped that the Spartans, the finest warriors in Greece, would respond, but this is what happened, according to Herodotus:

Aristagoras showed the Spartan king a bronze tablet, on which a map of the entire world was engraved, including all rivers and every sea. He said: “Don't be offended by my impatience. This is the problem. For the Ionians to be slaves and not be free is a disgrace ? to themselves, to the rest of Greece, and especially to you, Sparta, her foremost city. By the gods of Greece, rescue the Ionians, your kith and kin, from slavery. It will be easy. The barbarians are not brave fighters like you; they wear trousers and turbans ...”

He carries on, tempting the Spartan king with tales of the riches of the Persian empire. “When you take Susa, you will be as wealthy as Zeus.” But the king asks for time to think. Two days later

He asked Aristagoras how many days it was from the sea to Susa. Here Aristagoras, though he had fooled the Spartan so far, slipped up. He should not have told him the real distance, but instead he told him it was a journey of three months from the sea. “My friend and guest,” the king said. “You must leave Sparta before sundown.”

But Aristagoras did not give up - he started offering bribes of increasing value.

The king's daughter, Gorgo, aged eight or nine, was with him, despite Aristagoras's suggestion to send her away. When Aristagoras upped his offer to 50 talents, the girl said “Father, your guest will corrupt you unless you go away now.”

But he did manage to persuade the people of Athens. Athens had recently become a democracy , and it was the people’s decision to send help to the Ionians - 20 ships. They joined the large Ionian army, and attacked Sardis, once Croesus’ capital, and now the chief city in this part of Persian territory. They took it. Fire broke out and destroyed the city. The Athenians returned home. They hadn’t really done much to help, and the fire was probably accidental.

Soon, however, after a few setbacks, Aristagoras abandoned the cause, and, despite the re-appearance of Histiaeus, the leadership fell apart, and the Ionians were soundly beaten at sea. Miletus, the beautiful city of Histiaeus and Aristagoras was sacked, the men were killed and the women and children sent as slaves to Susa. The “Ionian revolt” was all over.

NEXT: ON INTO EUROPE

Ionian Greeks had been living on the eastern coast of Anatolia for hundreds of years. Cyrus' conquest of Lydia had made them part of Persian territory: in fact the Persians seem to have used "Ionian" as their usual word for "Greek". When Darius appeared to be ambitious to control the Aegean Sea, the Ionians became worried, and decided to reclaim their independence from Persia.

Despite (a little) help from Athens, the rebellion failed and Persia regained control of Ionia.

"The land of the rising sun" -the Greek name for what's now Turkey (the Asian part). It's also called Asia Minor - but I prefer Anatolia.

Greeks were still living in Anatolia in large numbers until the 1920s, when they were expelled on the orders of Kemal Ataturk, founder of modern Turkey. They had to go as refugees to a Greece they had never known. Turks living in Greece were expelled.

The Hittites had controlled Anatolia until their power suddenly collapsed around 1175 BC. As well as the impressive remains of their capital at Hattusa in central Turkey, they left extensive written records- including letters exchanged with the Pharaohs of Egypt, and details of treaties with the Assyrians. Troy (also called Ilium, hence Iliad, the story of Troy) appears in Hittite records as Wilusa.

The origin of our word "barbarian" - and the usual word used by Greeks to refer to Medes and Persians. It wasn't originally quite as insulting as it soon became: it once meant just "people who didn't speak Greek" - whose language sounded to them like bar-bar-bar- (but still offensive). Over a millennium later, the Arab rulers of Persia often called Persians Ajam - which means "the mumblers" - a reference to their struggles with Arabic.

Another Greek word whose meaning has changed for the worse. Many Greek cities were ruled by "tyrants" - the word just meant men who had won power by force, as opposed to kings who inherited power through their families. They were often good rulers, and supported by their people. But a few who were cruel and greedy gave the the word tyrant its present meaning. Another reason for the unpopularity of the word was that most Greek tyrants supported Persia in the run-up to the wars of 490 - 479 BC.

Greeks wore a chiton, a garment that was a sort of all-in-one T-shirt and skirt. Women wore it long, men usually had it it tucked up above the knee with a belt. They thought that trousers were ridiculous and effeminate.

"father of gods and men" - the chief god of the Greeks.

A Greek word for a Greek idea. Some Greek cities got rid of their tyrants and established a democracy. Athens is the best known. There the people (not women, slaves, foreigners or those under 18) got to argue about what they wanted to do, and vote on it. Nearly always they did what one of the rich citizens had suggested. But they did actually vote in person - there was no parliament.

The "inventor" of Athenian democracy was an aristocrat - Cleisthenes. Cleisthenes' enemies - supporters of the tyrants he'd expelled - were getting help from Sparta (always opposed to democracy). Cleisthenes had organised help from Persia, which was in fact not needed as the Athenians defeated the Spartans by themselves. Democracy was safe - but the role of Persia was never mentioned again by the Athenians: to secure Persian help they had submitted to the Great King, and given the symbolic earth and water. Later, it was the Athenian tyrants who asked for help from Persia (Hippias who hoped to be restored when the Persians had won at Marathon) - and the father of democracy's dealings with the Persians were airbrushed from history. Interestingly, Cleisthenes himself "disappears" from history quite soon after his democratic reforms.