The Sasanians: the contoversial reign of Kavad

There's no shortage of sources for the long and interesting reign of Kavad. Unfortunately they disagree dramatically with each other, and reconstructing the exact course of events is impossible. It's made more complicated because he was actually king twice - with a three-year (or 2- or 6-year) interval where his brother Zamasp replaced him. This page is a personal take which tries to make sense of the confusion.

Kavad was 15 (or maybe even younger) when he became king, after the nobles had lost patience with Balash. He'd actually grown up among the Hephthalites, as he'd been given to them as a hostage after his father's second defeat, and they probably helped him to oust Balash.

He must have been supported by leading nobles, who perhaps then tried to exert too much influence over the young king, who began looking for a way to curb their power. 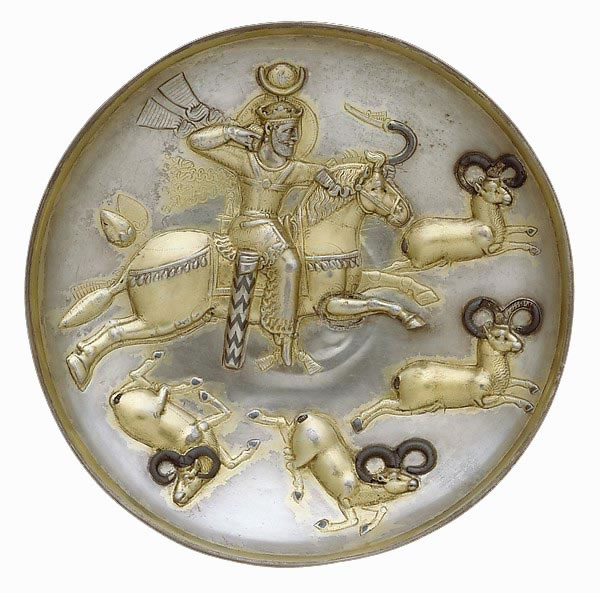 A gilded silver plate showing either Kavad I or his predecessor Peroz I hunting rams (Sasanian kings are identified from the design of their headgear).

Kavad seems to have got an idea of how to do this from the teachings of a Zoroastrian "protestant" sect. His ideas and theirs coincided in several respects: Kavad was a pacifist and a vegetarian. But their really revolutionary idea involved the sharing of women, an idea that was much misunderstood at the time and has been ever since. The three contemporary sources say:

Kavad reestablished the abominable heresy which teaches that "women should be in common and everyone should have intercourse with whoever he liked". [Joshua the Stylite c. AD 507]

Kavad passed a law that "Persians should have communal intercourse with their women". [Procopius c AD 527-531]

It is said that Kavad made a law according to which "women were to be available to men in common". [Agathias, died c AD 582]

Females on a silver and gilt vessel from the Sasanian period. Photo Wikimedia commons.

It appears to have been a move to undermine the power of the nobles, who were beginning to think they were stronger than the king. The nobles kept hold of their fortunes and increased them over the generations partly through endogamy (marrying within the family) - thus no money would leak outside the great families, and the rich stayed rich and the poor stayed poor. Kavad's ideas would lead to a breakdown of this traditional order of things - and the nobles would have to share their women. The mystique of the noble families, and their hereditary privilege would be ended. He does not appear, though, to have been in favour of sharing all property - as the communist followers of Zaradusht were - only women. He wasn't against marriage or the inheritance of property: he was simply in favour of preventing the wealthy from hoarding women in their harems, or keeping their daughters for themselves.

"When Adam died, God let his sons inherit the world equally; nobody has a right to more property or wives than others." [al-Tabari]

But of course, it didn't happen. There was a violent reaction, and Kavad (remember how young he was) was dethroned and put in prison, to be replaced by his brother Zamasp in AD 496.

Kavad was imprisoned in the notorious "Castle of Oblivion" (sounds like a computer game!), from where he escaped. He went back to the Hephthalites, who helped him to get his kingdom back. Zamasp surrendered without fuss.

When Kavad was reinstated, he forgot about his youthful ideas, and ruled successfully and conventionally for another thirty years. He abandoned the woman-sharing idea, made peace with the religious establishment and got rid of only those nobles who'd supported his removal from power. There were various important problems to deal with. 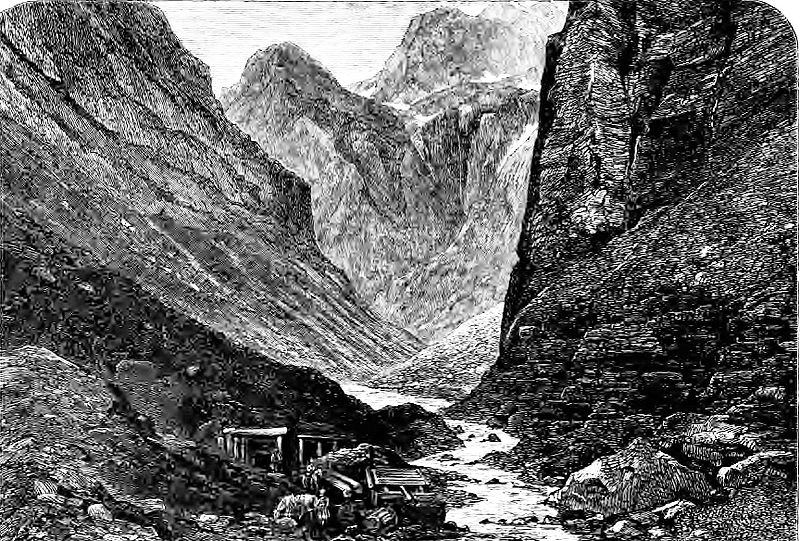 The Caucasus mountains: not as secure a barrier as they look.

He needed money to pay off his Hephthalite friends. The Byzantine emperor (Anastasius at this time) was supposed to help pay for their joint defence of the Caucasus, but was refusing to do so - a good excuse to attack them in search of plunder. Between AD 502 and 506 there was inconclusive fighting between the two super-powers in northern Mesopotamia: Kavad wasn't able to press home his advantage, because he also had to deal with attacks in the Caucasus. Peace was made in AD 506, and Kavad got his money. See also under Sophene

Between about 525 and 528, there was trouble with Kavad's Arab allies, the Lakhmids. An Arab tribe, the Kinda, invaded and briefly occupied their capital at Hira. A reminder that Arabia Deserta was capable of asserting itself.

Also in the 520s there was renewed confrontation with the Byzantines in the Caucasus region - there were Sasanian victories, including a defeat of the emperor Justinian's general Belisarius, but basically the stalemate continued.

In the early 530s Kavad joined his Lakhmid Arab friends in an invasion of Byzantine Syria, trying to capture Antioch - which they nearly did. But it all came to nothing when Kavad, now an old man, died in 531.

At home, Kavad had begun a survey of his kingdom, planning to produce a kind of "Domesday Book" - a complete register of all property - its ownership, location, cultivation and value - right down to who owned each individual olive tree and date palm. This was a preliminary to reforming the tax system, which Kavad probably started to implement. The grievances which tax reforms caused to the small-scale farmers began to be exploited by Mazdak - a Zoroastrian heretic, and follower of the Zaradushti sect which had inspired Kavad's woman-sharing policy during his first reign. Mazdak wanted not just women to be shared equally, but all property - he's often been called the first communist:

Mazdak's followers claimed "they were taking from the rich and giving to the poor and that whoever had a surplus of land, women or goods had no more right to them than anyone else." [al-Tabari]

It's not clear whether Mazdak's followers were a serious problem during Kavad's reign: they certainly became one later.

Kavad had three sons - and wanted the youngest, Khusrau (Chosroes in Greek and Latin) to succeed him. He'd tried to get him adopted by the Roman emperor Justin, so that he could be sponsored and protected by the Byzantines. But Justin refused. When Kavad died, the result was once again a free-for-all as brothers fought each other for the crown.

A conflicting view and full discussion can be found here - Khodadad Rezakhani: Mazdakism, Manichaeism, and Zoroastrianism: In Search of Orthodoxy and Heterodoxy in Late Antique Iran

NEXT: KHUSRAU I, GREATEST OF ALL SASANIAN KINGS

in the first he tries a radical reform and is stripped of his kingship. In the second, he's a conventional ruler, with the usual frontier problems - and the usual stand-off with Byzantium. A cadastral survey ("Domesday Book") to reform the tax system will lead to serious upheaval during the reign of his successor.

For details of the Byzantine side of the story go here.

The contemporary sources (Procopius, secretary to Belisarius the Byzantine general under emperor Justinian; Joshua the Stylite, a Christian Syriac chronicler; Agathias, a Greek who had access to notes on the official Sasanian records) mention Kavad's "communism" but do not mention Mazdak at all - very puzzling. All later writers, both Christian and Muslim, claim that Mazdak was Kavad's inspiration. Also puzzling! The puzzle was solved by Patricia Crone of Cambridge University: the full evidence is set out in her article in the Journal of Persian Studies entitled Kavad's heresy and Mazdak's revolt.

Kavad's reign was interrupted; he became king twice. There are more different English spellings of his name than for most kings: he's also Kavadh, Kawad, Qubad, Ghobad and many others.

These were followers of one Zaradusht, a Persian contemporary of Mani (who died in AD 277). It seems to have been a heretical Zoroastrian sect, trying to reform the religion by "getting back to basics". They had little influence until Kavad, and later Mazdak, took up some of their ideas: women and property produce envy, greed and hatred. If women and property were held in common this would not happen: women and property are the cause of all the quarrels among mankind. "Ahura Mazda created all men equal, and gave them the necessities of life (food and sex) to be shared equally among themselves. Women and property should belong to everyone to share - like water, fire and pasture. Nobody should have more than their fair share." [al-Tabari based on later Muslim sources] Communism?

A remote place where noble opponents of the regime could be sent and forgotten. There are various stories about how Kavad escaped: according to Procopius (Byzantine Greek ) he escaped in his wife's clothes; according to Tabari (Persian chronicler and Islamic scholar, 9th century) he was wrapped in a carpet. Others say it was his sister - but she was probably also his wife as was the Sasanian custom.

While Kavad was busy elsewhere, the Byzantine emperor Anastasius had provoked retaliation by hastily establishing a large military base just his side of the border, contrary to earlier agreements, a city called Dara. When peace was made, the Byzantines paid money in compensation for "breaking the rules". This new city was to be a bone of contention between the superpowers for some time to come.

The coincidence of Kavad and Mazdak both taking inspiration from Zaradusht's heretical sect has caused much confusion. Many historians have tried to imagine Kavad and Mazdak working together during his first reign. But the 6th century sources don't mention Mazdak at all - confusion seems to have begun with the later Arab chronicles. Mazdak's "peasants' revolt" was probably in the reign of Khusrau I - as all sources agree that Khusrau suppressed it.