Two defeats at the hands of the invading Arabs were enough to put an end to the Iranian domination of Mesopotamia and the Iranian plateau, which had lasted for 1200 years (apart from the brief interval of Greek rule in the 4th and 3rd centuries BC).

Qadisiyya in AD 637 lost them Mesopotamia (Iraq) and their capital at Ctesiphon on the Tigris (Arab al-Mada'in).

Nihawand in AD 642 opened up the entire Iranian plateau to the Arab victors.

At the same time the Arabs took Syria from the Byzantines - though the conquest of Anatolia was beyond them.

Why did the Sasanian empire crumble so quickly?

Some or even all of the above may have been true - but the Byzantine empire also suffered two defeats (Ajnadayn 634 and Yarmuk 636) and was no less troubled by corrupt and unpopular priests and rulers. Yet Byzantium survived - for 800 more years. The simplest explanation is probably the best: it was the Sasanian's bad luck that Iraq lay on the Arabs' doorstep, and that the Sasanian capital was in Iraq. Constantinople was secure in its remoteness, and Anatolia's terrain, though regularly invaded, was hostile to a desert people. Had the Sasanian capital - with its treasury and administration been on the Iranian plateau, the other side of the Zagros, at Rayy (Tehran), say, it too could have held out, and coped with the loss of a couple of battles.

Resistance and fight-back: the last Sasanians

The family of Yazdegird III, the last Sasanian king of kings, made several unsuccessful attemts to regain a foothold in Iran. His son Peroz may briefly have occupied a corner of Seistan, and even aided a rebellion in Chorasmia - but the sources are not clear. Peroz's son Narseh was with a Chinese force supposedly sent to confront the Arabs, but which accomplished nothing at all in 20 years. A grandson of Yazdegird called Khusrau is recorded in Chinese accounts with an army of Turks trying to "recover his kingdom" (AD 728). He failed to do so, and, probably, returned to an honoured retirement in China like his father and grandfather.

Many Iranian cities made the conquest difficult: there was widespread resitance to the Arabs. Hamadan in Media rebelled, and Istakhr in Persis, home city of the Sasanian dynasty, rebelled several times - even when there had been punitive retribution after a siege in 650 or 651, in which thousands were killed, according to Arab sources. But for the most part - with the exception of Tabaristan (between the Alborz mountains and the Caspian) and parts of Chorasmia (Khorasan) - the Iranian plateau, as well as Iraq, was in Arab hands by the time Yazdegird III was murdered in AD 651. 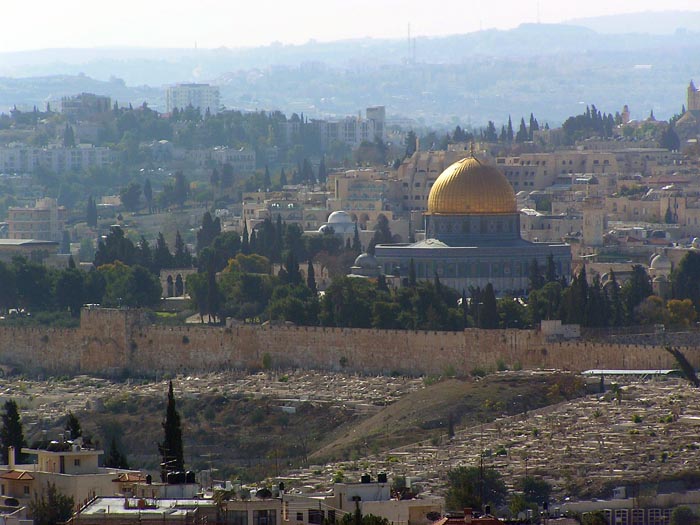 The oldest surviving mosque: the Dome of the Rock, Jerusalem, built by the Umayyad caliph Abd al-Malik (685-705). Photo AMW

As well as tension between those who accepted Abu Bakr's caliphate and those who supported Ali, there was also rivalry between former Byzantine areas of the Arab empire (Syria), former Sasanian areas (Iraq), and the original homeland in Hijaz (Arabia). Possibly these rivalries had existed from the very beginning, corresponding to three different communities, each with a claim to be the legitimate heir of Muhammad. Syria emerged supreme militarily, and claimed authority over the rest. The murder of Uthman, the third Caliph and a member of the Umayyad family, led to civil war in which Ali's forces were eventually overcome by the Umayyad Muawiyah, who proclaimed himself caliph. The Umayyads were an old family from Mecca, from a different branch of the Quraysh, Muhammad's tribe. Hostility between the two branches went back many generations.

Two groups were implacably opposed to the Umayyad takeover: the Kharijites, who believed the caliph should be democratically elected by righteous Muslims - and removed if he acted unjustly, and the Shi'a (Party of Ali) who believed the caliph should be a blood descendant of Muhammad, or at least a member of his family. The Kharijites had been responsible for the assassination of Ali, but lacked the military clout to challenge Muawiyah, though they remained an irritant. The Umayyads moved their capital westwards to Damascus in Syria - away from Kufa, Ali's capital near Ctesiphon on the Euphrates. They took over much of the administrative machinery from their Byzantine predecessors - but were accused of favouring Arabs over other Muslims, and also of becoming corrupted by power and luxury. The caliphate became hereditary in their family, alienating non-Syrian, and non-Arab Muslims, as well as the Shia. Mecca reverted to being a religious centre and a destination for pilgrims.

The Shia never accepted the Umayyad leadership. A revolt led by Ali's son Imam Husain was crushed at Karbala in AD 680 by Caliph Yazid - Husain was killed and his supporters massacred. There were other violent outbursts and rebellions: the Shia ideology began to take shape as martyrs were made and grievances piled up. Opposition - originally in Iraq - began to organise. 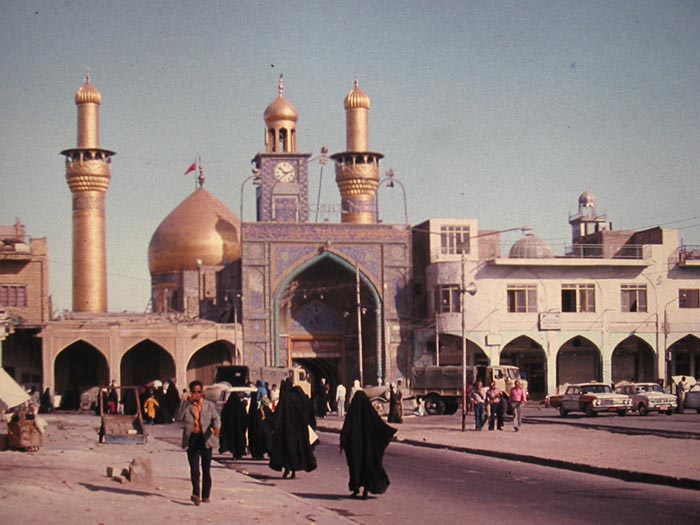 At home the Umayyads were confronted by civil wars, and numerous revolts, which eventually ended in the overthrow of the dynasty. Abroad the Arab empire continued its expansion, but, although for a time territorially larger than the Persian empire at its greatest, it soon had to accept its limits. Egypt was won over; North Africa was conquered and was intermittently rebellious, but stayed under Umayyad control. Spain was annexed, but expansion beyond the Pyrennees was halted by the Franks at the Battle of Tours in AD 732. There were numerous attacks on the Byzantine empire in Anatolia, and on Constantinople - which achieved nothing. Expansion north of Armenia across the Caucasus was stopped by the Turkic Khazars. The north east of the Iranian plateau (Chorasmia and Transoxiana) was subdued - but it was from here that the Umayyads' nemesis eventually came. The Arabs invaded India but were soon driven out.

Two great mosques date from the Umayyads - the Dome of the Rock in Jerusalem (completed in 692) and the Great Mosque in Damascus (built under al-Walid).

The Umayyads eventually lost their Syrian-based caliphate to the Abbasids - but continued to rule in al-Andalus (Andalucia), which remained under Arab control until AD 1051. There are many impressive reminders of their time in Spain, especially the Great Mosque in Cordoba (where los reyes cattolicos plonked a cathedral in the centre), and the Alhambra in Granada. 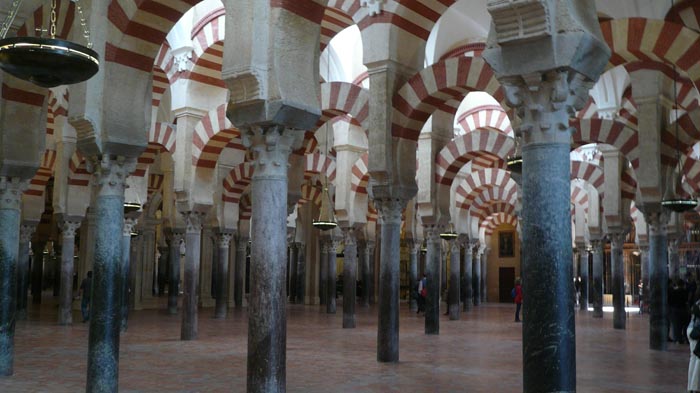 Vast numbers of slaves were acquired by the Arab conquerors - the Arabs were very much a minority in the lands they had occupied. Most of these slaves worked in the house, or as traders and craftsmen (and prostitutes), and therefore had close contact with their masters. Unsurprisingly, many of them adopted their conquerors' religion - and soon non-Arab Muslims were in the majority. Slaves were often freed - but instead of becoming equals, they were still treated as slaves, with "massive prejudice" against them. They were barred from positions of responsibility, could not marry Arabs, and had to worship at their own mosques. Legally they were mawali, clients of their former masters, though their legal status meant little. However, they fought on both sides in the civil war between Ali and Muawiyah - and played an important part in the revolt which seized Kufa in 685-7.

Many of these mawali were Iranians - and Arab leaders began to fear their increasing numbers and influence. People said:

"It might be better to kill nine out of ten captives than to have slaves. They will not remain loyal and they will ruin your lives"

But slaves continued to come, and continued to be freed. As prejudices lessened, within a few generations the peoples of the former Sasanian empire were following Islam, speaking Arabic, and marrying Arabs. The government, however, and its army were still exclusively Syrian, and attuned to the Arabs' desert past rather than their more multi-cultural present.

The Arabs did not persecute Zoroastrians - although fire-temples were destroyed. For practical reasons, they were accepted as "Peoples of the Book" (according to the Quran strictly only Jews and Christians), but some common beliefs - as well as evading the tax paid by mon-Muslims (the jizya) - encouraged conversion.

NEXT: BLACK FLAGS FROM THE EAST - THE ABBASID REVOLUTION

The early years after the conquest. An uneasy modus vivendi emerges between Muslim Arabs and their predominantly Christian, Jewish or Zoroastrian subjects, though tensions between Muslim communities in Syria and Iraq continue to simmer. 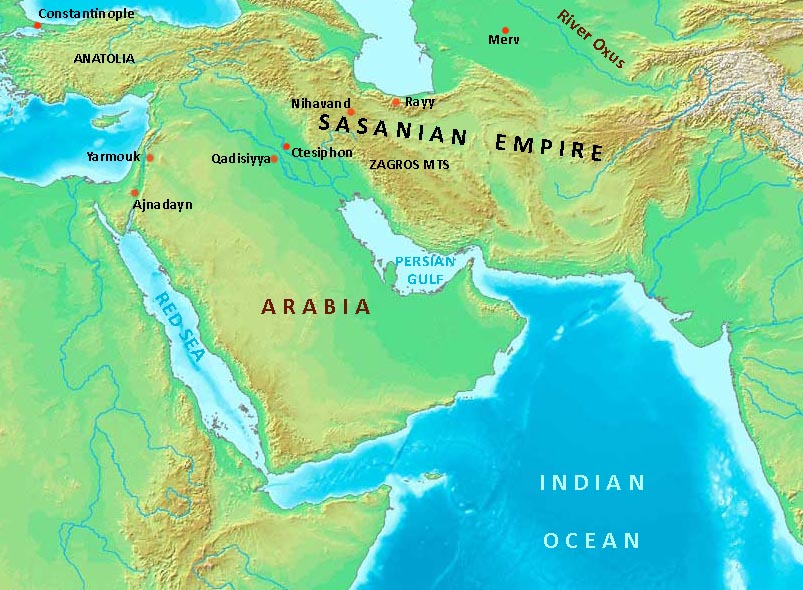 The Arab conquests - defeat of Byzantine and Sasanian empires

The first four Caliphs (Rashidun - 'the rightly -guided ones'

Muhammad died in 632. His successors (caliph simply means "successor") were:

Uthman (Osman) 644-656. Son-in-law of Muhammad. A member of the Umayyad family. Elected caliph by a committee of 6 appointed by Umar on his death-bed. Assassinated by rebels supported by Ali acording to the Umayyads.

Ali 656-661. Muhammad's cousin, and married to his daughter Fatima. He had previously been a candidate after the death of Umar, but was elected to succeed Uthman despite links with the rebels. The Umayyads refused to accept his election.

The first four caliphs are known to the Sunni as Rashidun, the "rightly guided caliphs". The first three are not recognised by the Shi'a, who believe that Muhammad chose Ali as his successor - he kept quiet and reluctantly accepted Abu Bakr, Umar and Uthman for the sake of unity in troubled times. The Shi'a acknowledge Ali as the First Imam, the Sunni as the fourth Caliph. An imam is a descendant of Muhammad, who has been given special powers by God.

The first Imams according to Shi'a tradition:

Hassan (624 - 680) grandson of Muhammad. Poisoned by his wife on orders of Muawiyah.

Muhammad al-Baqir (677 - 732) descended from Hassan and Husain. Son of Zayn. A great scholar. His brother Zaid became founder of the Zaidis ("Fivers")

Jafar al-Sadiq (702 - 765) Son of al-Baqir. On his death (poisoned by Abbasid Caliph al-Mansur) the Shia split between the Ismailis ("Seveners") who believed Jafar's eldest son Ismael was the next Imam, and the "Twelvers" who preferred his third son Musa.

Archaeology has revealed that there was very little disturbance to the status quo in Syria after the conquest. Christian worship continued without interference.

If Zoroastrians had been classed as idolaters, they would have been faced with conversion or death, according to Islamic principles. This would have resulted in an impossible task! But the Zoroastrian dualism was totally incompatible with the Islamic, Jewish and Christian "One God". The Zoroastrian god was part of his creation: for the monotheistic religions, god is the creator and separate from his creation.